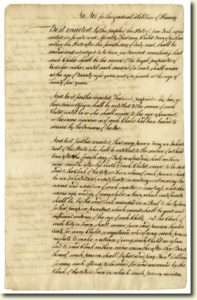 The 1799 Act for the Gradual Abolition of Slavery provided that “any child born of a slave within this state after the fourth day of July next shall be deemed and adjudged to be born free: Provided nevertheless. That such child shall be the servant of the legal proprietor of his or her mother until such servant, if a male, shall arrive at the age of twenty-eight years, and if a female, at the age of twenty-five years.”

It further provided that “every person being an inhabitant of this state who shall be entitled to the service of a child born after the fourth day of July as aforesaid, shall, within nine months after the birth of such child, cause to be delivered to the clerk of the city or town whereof such person shall be an inhabitant, a certificate in writing containing the name and addition of such master or mistress, and the name, age and sex of every child so born…”

The above birth records are tagged as “REG” for registrations, identifying children claimed for servitude.

It also provided for the abandonment of the newborn children: “The person entitled to such service may, nevertheless, within one year after the birth of such child, elect to abandon his or her right to such service, by a notification of the same from under his or her hand, and lodged with the clerk of the town or city where the owner of the mother of any such child may reside; in which case every child abandoned as aforesaid shall be considered as paupers of the respective town or city where the proprietor or owner of the mother of such child may reside at the time of its birth; and liable to be bound out by the overseers of the poor on the same terms and conditions that the children of paupers were subject to before the passing of this act.”

These records are tagged as “ABN” can mean that the owner separated the child from the mother and presented the child to the overseers of the poor. The state paid $3.50 per month for the care of the abandoned children. ABN can also mean, particularly after payment program was terminated in 1804, that the owner was “abandoning” the right to future services by the child, but the child remained in the household.

A major project or the New York Slavery Records Index is to identify these records and assure access to them. The 1799 law mandated the records to be developed and maintained by the clerks of Towns and Cities, but they have not bee consistently protected and archived. We are finding them in the archives of Clerks’ Offices, in libraries, historical societies and archives of cities, counties and NY State. We also have located Comproller’s Office records processing payments for foster care of abandoned children, but most of these records do hot have corresponding original birth registration abandonment records.