Did Alexander Hamilton own slaves? Did he engage in slavery?

Until recently, the New York Slavery Records Index did not list Alexander Hamilton as an enslaver because we had no record to support this designation.  Census records did not enumerate any enslaved persons in his household. He did not register any emancipations nor any births of an enslaved person. 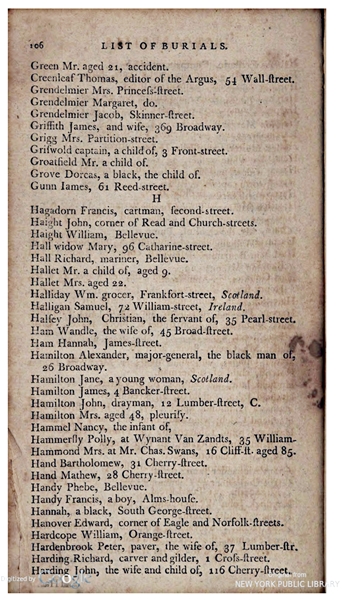 James Hardie, An account of the malignant fever, lately prevalent in the City of New York, 1798, page 106

However, this year, we discovered a document that caused us to reassess the decision. Entitled An account of the malignant fever, lately prevalent in the City of New York, the document is a description of New York City’s Yellow Fever epidemic in 1798 by James Hardie, Secretary to the Board of Health. He compiled an extensive report, including a list of all of the people who died. Alexander Hamilton’s name appears on page 106 in relation to one such death.

In the middle of the page is the following entry: “Hamilton Alexander, major-general, the black man of, 26 Broadway.” Is this proof of enslavement by Alexander Hamilton?

We know this is the founding father Alexander Hamilton. Old address books from the period show him residing at 26 Broadway in 1798.

Hardie appears to designate enslaved people in several ways, sometimes referring to them as slaves, but consistently referring to them as possessions of someone else with expressions like “the slave of” or “belonging to” or simply “of.” In many cases, Hardie does not include the name of the person who died, but rather the name of the possessor. For example, he lists “Doctor Burrow, the negro of” to describe the death of an unnamed person enslaved by Doctor Burrow.  Similarly, the Hamilton record does not name the person who died.

So, that was the first record in the New York Slavery Records Index identifying Alexander Hamilton as an enslaver. An alternative interpretation of this record is presented on page 30 of an essay by Michael Newton and Philo Hamilton titled Opening a Door to Their Emancipation: Alexander Hamilton and Slavery.

A second set of supporting records come from a recent article by Jessie Serfilippi of the Schuyler Mansion State Historic Site entitled  As Odious and Immoral a Thing: Alexander Hamilton’s Hidden History as an Enslaver. The article presents new evidence of Alexander Hamilton purchasing enslaved people for himself and acting as an intermediary in transactions to buy and sell enslaved people for others. 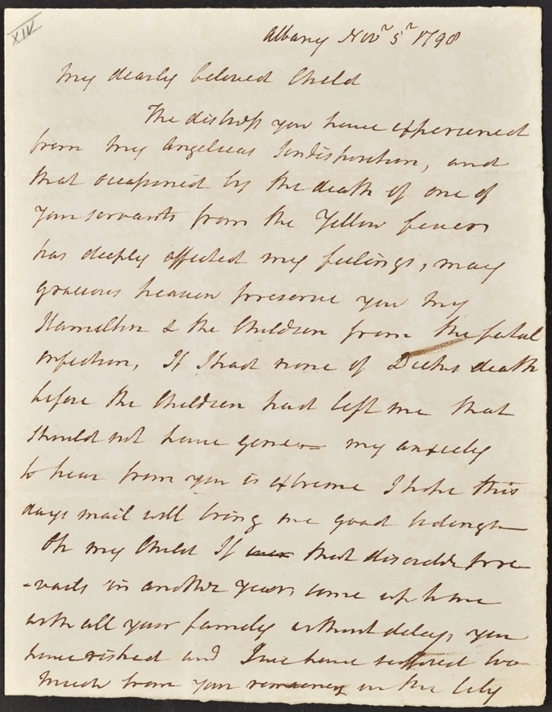 Of particular relevance to our 1798  record of the “black man of Alexander Hamilton” who died in the Yellow Fever epidemic is a letter dated November 5th 1798, in which Philip Schuyler writes to his daughter Eliza, Alexander Hamilton’s wife: “The distress you have experienced from my Angelica’s indisposition, and that accompanied by the death of one of your servants from Yellow fever has deeply affected my feelings, may gracious heaven preserve you my Hamilton and the children from the fatal infection, If I had known of Dick’s death before the children had left me they should not have gone.”

Future research may shed additional light on the identity of the deceased.

For now, Serfilippi’s article allows us to add new entries for Alexander Hamilton  to the Slavery Index, accompanied by links to the essay disputing these conclusions by Michael Newton and Philo Hamilton titled Opening a Door to Their Emancipation: Alexander Hamilton and Slavery.

You can find them by selecting the SEARCH link and entering Alexander Hamilton’s name.

This entry is licensed under a Creative Commons Attribution-NonCommercial-NoDerivatives 4.0 International license.